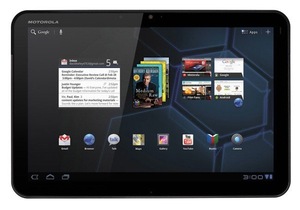 Out of the box, the device comes with Android Honeycomb version 3.0.1, and no support for microSD card yet (it is advised in the manuals that microSD card support will be available trough a future system update).

The Xoom ships with an “unlockable” bootloader, that means you can connect via fastboot and issue the command ‘fastboot oem unlock’ to be able to flash unsigned code at the expense of voiding your warranty, and that’s what you should do if you want support for microSD card today, because there’s an unofficial kernel with microSD support already available: Tiamat AOSP kernel Version 1.3.0.

Another caveat is that it won’t install the Youtube app available in the Android Market (when you try, it just won’t install). This is easily solved by installing an old youtube 2.1.6 APK and then rebooting, it will be automatically upgraded to the latest youtube version 3.0.15.

Flash support which wasn’t available in the early days is now available by installing the Flash app through the official Android Market, no issues at all.

There are many guides posted out there on how to root the Motorola Xoom automatically in one click… but I prefer to do it following the standard procedure and understand what I am doing rather than let some unknown app do whatever God knows with my device, so here are the steps I followed. On linux you don’t need any weird motorola drivers, just the standard Android SDK tools (adb & fastboot) to perform the oem unlock and flash the Tiamat kernel. Once done, just install the ‘su’ binary, ‘superuser.apk’ and busybox and you’re done.

It is possible to run Linux on the Motorola Xoom, it will not replace the android system but just use the android kernel and run the linux image on a chrooted environment. There’s also the possibility to access the graphical X window system through VNC, although I don’t want it, I just installed the minimal system to have the power of a full linux system shell. Instructions are available here: Ubuntu Maverick on Motorola Xoom. I made this script to start and stop the linux chroot environment from command line in android terminal (must be placed in /system/bin/).